“Visit our expanded showroom & see firsthand all of the windows and doors we have available. Our low pressure sales team will help you make the best possible choice for your home.”

Please contact me because I’d like to learn more about window replacement, siding or new doors for my home.

Twin Cities Homeowners: Do You Know Which Way a Casement Window Should Open? 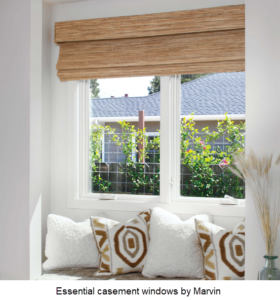 While the double hung window remains the most popular style for homes across America – not just here in the Twin Cities – the casement window is gaining in popularity.  It is clearly the second most installed window type, but it’s moving up and will likely eclipse the double hung window.  There are a number of reasons for this, and we’ll be discussing those in a future post.  But for this particular article we’re going to handle (no pun intended) where the handles should go.

A homeowner asks, “You mean there is more than one position?  I thought casement windows only opened one way.”

Well, that statement is partially correct. Casement windows should usually open outward, not inward. (Although Marvin does offer an ‘Ultimate casement’ that has an inward swing, but this type of configuration is unusual.) But they can swing open to the left or to the right, and the direction is determined by handle placement.  Handles are placed opposite the hinges. A crank on the left side will turn to the left, causing the window to open toward the right side.  A right-mounted handle cranks right and the window opens toward the left side.

So how do you figure out which way a casement window should be installed?

There are a number of factors to consider.